Helps you start new renovation projects, and the experts to finish them.

The relationship between building contractors and their customers is more often than not an infected one. Unclear and misunderstood agreements, unreliable contractors and missed out payments are just a few of the reasons why there unfortunately tends to be a lack of trust between producer and consumer – often before a project’s even started. There was a need for a new and standardized approach that works to prevent conflicts during renovation projects.

How it all began

The relationship between building contractor and customer

Finding a professional and reliable contractor for a renovation project is well known to be a bit tricky. Not only have the existing platforms, for matching a contractor with a potential customer, been unnecessarily complicated, but they’ve also been lacking features that instills a trusting relationship between the two. Unclear agreements, unreliable contractors and missed out payments – the reasons and stories are endless and coming from both sides of the table, as far too many projects have ended up in financial and legal conflicts.

For the homeowner it’s important to be able to verify that the building contractor is professional, certified and insured before starting up a project, as well as for the agreement to be clear and interpreted correctly by both parties. For the contractors, one of the main concerns is always if there’ll be a discussion regarding the price and whether or not they’ll be paid on time.

Missing is that third party who could meddle between the contractor and the customer. That someone or something who could help create that oh-so-important trust and ultimately make sure agreements are being followed, as well as bills being paid on time.

In need of a meddling platform

The Ireno journey started about two years ago. Former building contractor Jesper Zandin and entrepreneur Peter Östling had started talking about creating a digital service that could simplify the renovation process for both contractors and homeowners. One that in a structured manner would approach property renovation projects in a blockchain-like fashion.

Jesper was already familiar with Prototyp and reached out in hope of us being able to help them bring contractors and homeowners closer together. Jesper and Peter already had a clear vision of what problems needed to be solved and an idea of how to solve them. They suggested we create an MVP (Minimum Viable Product) and a well-groomed technical structure on how to standardise the approach of property renovation.

To us at Prototyp it sounded like an exciting and well needed project, and the fact that we were meant to build the project from scratch and bring it all the way to launch made it even more interesting. We nominated Fredrik Hasselgren as tech lead, who immediately was up for the task. Him, Jesper and Peter we’re all really excited to get started and the project was booted summer 2019.

“Early on we felt confident working with Prototyp as they had a good understanding of the challenges that come with being a startup. A strong team spirit emerged from day one, and everyone, no matter what company, was working towards the same goal with great dedication.” – Jesper Zandin, Ireno

To digitize the construction contract ABS 18

Prior to the project we had identified a number of construction contracts that potentially would’ve been necessary to integrate on the platform, but after thorough evaluation, the Ireno team decided that the only contract necessary to digitize was the ABS 18.

ABS 18 is a commonly used construction contract in Sweden for the construction or extension of smaller properties and houses, produced by Konsumentverket, Villaägarnas Riksförbund and Sveriges Byggindustrier. It wasn’t completely unknown that the document needed to be digitized as it early on was pinned as a key feature necessary for the upcoming platform. What was unknown however, was how to digitize it (as it had never been done before) and how the user experience would pan out when a long, cohesive PDF was to be transformed into a convincing web form.

How do we get customers to deposit money on the platform?

From the beginning, there was to be an administrative role on the platform who could interfere if a conflict were to arise between contractor and homeowner. There was also the idea of homeowners being able to deposit money directly on the platform, but the question of how it would be done and how to get them to willingly deposit larger amounts of money was still unknown.

A big part of the work lies in building a brand users can trust. Another part is to actually build a product where it makes sense for the homeowners to deposit their money. As Ireno is meant to act as an independent third party and more as a link between contractors and customers, it all comes down to creating a deposit feature that aligns with the demands from both user parties.

Important to highlight, and notified on the platform, is that the homeowner is in full control of the deposit and that no money is withdrawn without their approval (using BankID). The contractor in turn is responsible for adding documentation and “proof” of the performed work during the process. This way the homeowner gets to take part of each (identified) step of the project and can approve it before any money can be withdrawn from the deposit.

The first version of the customer app

Even though the project and the demo’s first started out aimed at the contractors and their experience using the platform, we knew that we couldn’t consider our MVP done before the features for the homeowners were built in as well.

During the summer of 2020 we could present the first version of the customer app with its basic features intact. It was a simple interface containing plenty of business logic and you could preview a project, see uploaded documentation added by the contractor, and indications pointing to whether or not the homeowner was happy with the work that’d been made. Even though business logic isn’t very thrilling, the entire team felt encouraged when thumbs were pointing up, and they could start visualizing what the finished product would look like.

“I usually make a routine of doing demos every two weeks to make sure the client understands what’s going on behind the scenes. The demo is therefore a way to verify that we’re on the right track and creating what the client actually wants. It also works really well as a method to bounce off new ideas.” – Fredrik Hasselgren, Prototyp

The MVP demo for Beijer

During the project, several more parties and companies saw the advantages of the product we were building. We therefore decided to create an MVP demo purely for sales purposes and to be able to showcase what features could align with other businesses. The MVP demo was showcased for Beijer who, based on the demo, decided to partner up with Ireno. This was a huge first accomplishment for the project.

Changing user flows due to the lack of a UX designer

It’s difficult to point out clear pivots during the project, but one thing that was constantly changing was the direction of the user flow. Product owner Jesper and co-founder Peter were both really concerned with improvement and advocated for extra time being spent on finding the best possible solution. But as Ireno is a completely new service, there were no existing competitors from which we could sneak a peek, forcing us to build the user flow iteratively, based on feedback from customer testing.

A big reason for changing the user flow multiple times was the lack of a UX designer who could tell the team when and where things should be placed in the flow. It became evident already at the start of the project just how important it is to work with an experienced UX designer and what advantages it brings to have a clear plan to follow when it comes to user experience.

“Ireno has been a pragmatic, yet open minded client who truly values our expertise. We worked very well together, with open communication and quick decision making when needed. When our clients put their trust in us – that’s when the result turns out great.” – Fredrik Hasselgren, Prototyp

Our apps went live in the fall of 2020! We created one web application that supports four different types of users – two internal ones in the shape of general admins and payment admins. The external users are the building contractors and the homeowners (customers).

👉 How the service works

The contractor mobile app’s main purpose is to document completed work steps and being able to add extra jobs ordered by the customer on site.

"It’s amazing to finally be up and running and to hear all the positive feedback from the customers. One of our main values as a company is to be responsive to customer needs and adding features based on their feedback." – Peter Östling, Ireno

Project Ireno is as of today still in the startup-phase and new partners have joined in along the way. We’ve also seen that banks are showing a big interest in the products as they’re usually involved in giving loans for renovation projects. This has meant more requests coming in for the Ireno team to try and align their platform with more kinds of businesses. From the start, Prototyp has made up the entire developer team at Ireno and is today still involved in operations, development and support. 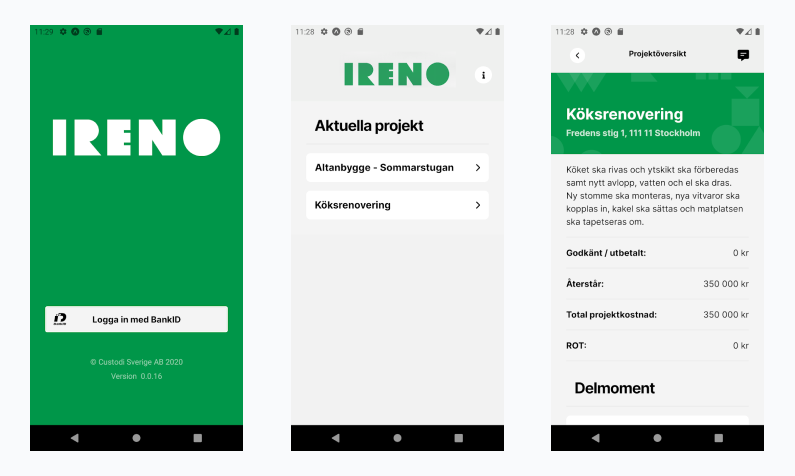 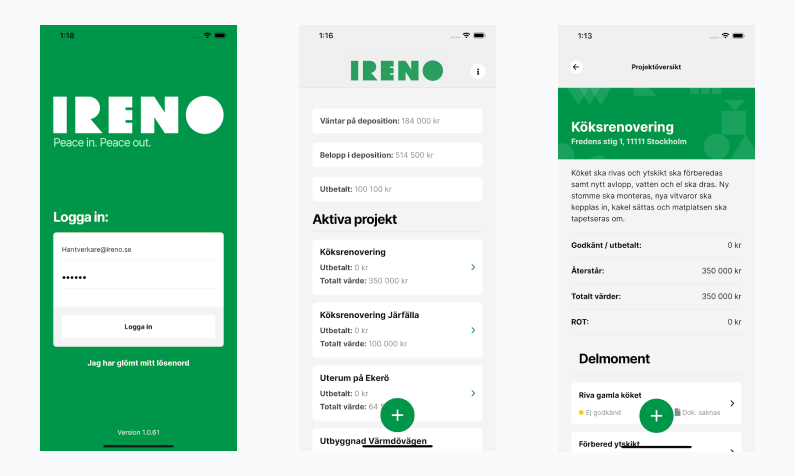 The importance of working with a UX designer from start

Having a UX designer onboard from the start would’ve prevented us from having to re-do the user flow multiple times – something that would’ve saved us time and shortened the overall process.

It was time to create the car leasing service of the future.

Read about our case with UGo